Swift Code is the code you need to provide to identify a bank when transferring money overseas or receiving deposits from abroad to Sri Lanka.

To become a member of SWIFT, banks and financial institutions must fulfill all conditions, including documents required by SWIFT and the most popular connection system.

Due to the nature of controlling the cash flow of the world, SWIFT’s security is very high, hackers have never been able to attack this system.

All banks around the world use SWIFT system due to its outstanding advantages as follows:

What is Swift Code?

Swift Code is a code format that is intended to identify a bank or a financial institution in the world. This code usually consists of 8 characters or 11 characters, each with its own meanings:

In addition, the Swift Code code can also be called BIC, short for Business Identifier Codes. Both Swift codes or BIC codes have the same meaning.

See also: What is a Bank Statement? How to receive bank statement? 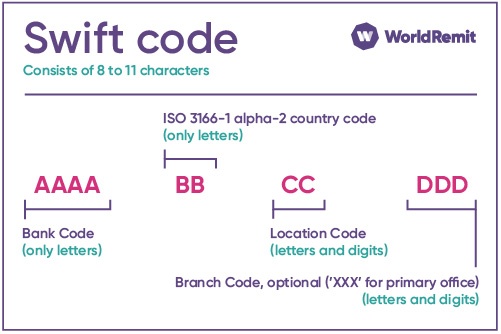 So basically, a Swift Code (BIC) code in our country is in the form AAAAVNVXDDD.

What is Swift Code used for?

Swift Code is something that you are indispensable when receiving / transferring money internationally. As mentioned above, Swift Code makes it easy to know what the name of the bank is, in which country, what branch, and what address is it?

In Sri Lanka, most banks often use 8-character Swift Code is the most popular. Because the 11-character type has additional branch codes, a bank has many branches. Therefore, banks often put Swift Code 8 characters on their website as below table.

When receiving money from abroad, you will normally be asked to enter information such as: Account Name, Account Number, Bank Name and Swift Code Code of that bank. In it, the name of the bank you should fill in is in English and the Swift Code code is filled in corresponding to the table above.

For other banks not listed in the table, please do a further internet search to view and fill in the correct information.

List of Swift Code codes of banks in Sri Lanka

I am Henrick Santor - Founder of Sriloan.com - CFA certified knowledge with more than 10 years of experience in the Finance field. I will share with you all the tips to have a balanced financial life.